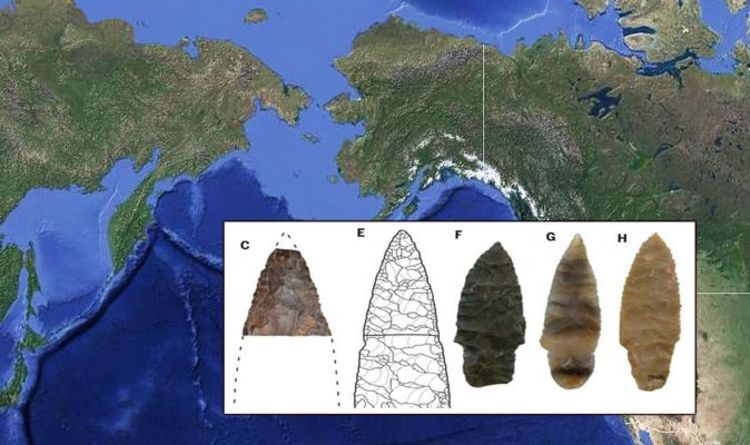 Native Americans are widely believed to have originated in Japan around 15,000 years ago. The theory, based primarily on archaeological evidence found at Native American sites, includes stone tools and other artifacts used by First Peoples. They have distinct similarities to those of the Jomon people, a group that first lived in Japan between 14,000 and 300 BC.

Analysis of their migration across the continent further added to the theory, with suggestions that Native Americans crossed the Bering Land Bridge until they reached the northwest coast of North America. .

However, the Bering Land Bridge was not a bridge as we know it.

The world was a very different place 15,000 years ago, with much more water trapped in frozen glaciers.

Many places where people lived, worked and traveled are now underwater.

The Bering Land Bridge was a strip of dry land, about the size of Australia, between eastern Siberia and western Alaska, making Asia and North America a continuous expanse earthen.

he stretched 994 miles from North to south and 2,982 miles from east to west.

The new discoveries, published in the journal PaleoAmerica, did not exclude that the Amerindians still make this trip across the “Bridge”.

However, the analysis suggests that the First Peoples are not descended from Japan.

Professor Richard Scott of the University of Nevada-Reno and his team of researchers analyzed the genetic and skeletal evidence. They concluded that the similarity of the tools was likely a coincidence, as the evidence “doesn’t match”.

The paper, which is set to rwrite Native American history books, analyze the teeth of the Americas, Asia and the Pacific, including the Jomon people.

“We do not dispute the idea that ancient Native Americans arrived via the Pacific Northwest – only the theory that they originated from the JÅmon people in Japan.

â€œThese people, who lived in Japan 15,000 years ago, are an unlikely source for Native Americans. Neither skeletal biology nor genetics indicate a link between Japan and America.

Professor Scott and his world premiere The team theorized that the most likely source for First Peoples “appears to be from Siberia.”

Only seven percent of Jomon tooth samples could be related to First Peoples. Genetic analysis reports a similar pattern.

Co-author Professor Dennis O’Rourke said: â€œThis is particularly clear in the distribution of maternal and paternal lineages, which do not overlap between the early JÅmon and American populations.

Footprints made over 21,000 years ago. (Image: National Park Service, USGS and University of Bournemouth)

“In addition, recent studies of ancient DNA from Asia reveal that the two peoples parted with a common ancestor at a much earlier time.”

Professor O’Rourke concluded the Jomon population represents “one of the least probable sources for the Amerindian peoples of one of the non-African populations”.

The team noted that caution should be exercised as the only tooth and DNA samples available to the Jomon people are less than 10,000 years old, which does not precede the arrival of First Peoples in America.

They added, however, “We are assuming that they are valid proxies for the nascent Jomon population or the people who dotted in Japan 16,000 to 15,000 years ago.”

Newly discovered footprints in an ancient lake bed have further reinforced the idea that Native Americans were not originally from Japan. Dating from 23,000 to 21,000 years ago, the footprints were discovered in what is now White Sands National Park in New Mexico.

Dr Sally Reynolds co-authored the team that confirmed the footprints were made by humans. She told IFLScience that the results confirm that the first migrations would have crossed the Bering land bridge.

The discovery sheds new light on when humans first arrived on the continent. Dr Reynolds said: “This means that humans migrated to the Americas much earlier, but still by the same route.”

Whether the footprints are definitely linked to Native Americans remains to be confirmed, it should be noted.

The full results of Professor Scott’s team have been published in the journal PaleoAmerica.