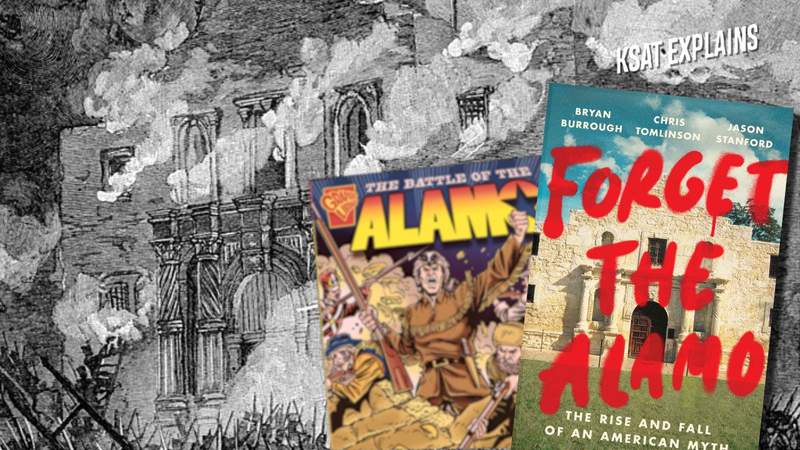 SAN ANTONIO – Editor’s Note: The KSAT Explains team hosted author Chris Tomlinson on Tuesday evening for a live discussion of the myths and truths surrounding the history of the Alamo. You can watch the full Q&A in the video player above.

Most people have heard of the Alamo and the battle that took place on its land. But over the years, more people have become familiar with the myths than with the whole complicated story.

Maybe there’s no better time to examine the way we’ve told and retold the story of the Battle of Alamo. In recent years, more and more Americans have become critical of how we remember historical events and people. Confederate monuments across the country have fallen. Without a doubt, more people are familiar with the Tulsa Race Massacre today than five years ago.

This summer, a trio of Texans released a boldly titled book Forget the Alamo: The Rise and Fall of an American Myth. As the title suggests, the book questions the stories that have been associated with the men who stood up for the Alamo and questions what they were really fighting for.

In Forget the Alamo, Chris Tomlinson, Bryan Burrough, and Jason Stanford argue that how we view Alamo’s past has more to do with perpetuating white supremacy than most would like to admit. For this reason, the release of the book has been polarizing. Just look at the Amazon reviews.

The book’s release also comes just months after a new Alamo overhaul plan was approved by members of San Antonio City Council. The plan had to be revised after the Texas Historical Commission voted in September to block the relocation of the cenotaph, a monument that honors fallen defenders of Alamo. One of the most controversial elements of the previous redesign proposal was the plan to repair and relocate the monument several hundred feet to the south.

Since its release, the book has been a topic of lightning rod discussion across the state. Watch the video above to learn more about the legends and myths associated with the Alamo. Chris Tomlinson then joined us to discuss his reaction to the book and questions surrounding the authenticity of some flashy items from the famous Phil Collins Alamo artifact collection.

To concern KSAT Explains: The Myths, The Truth, And The Battle Of How Alamo Is Remembered in the video player below.

Copyright 2021 by KSAT – All rights reserved.