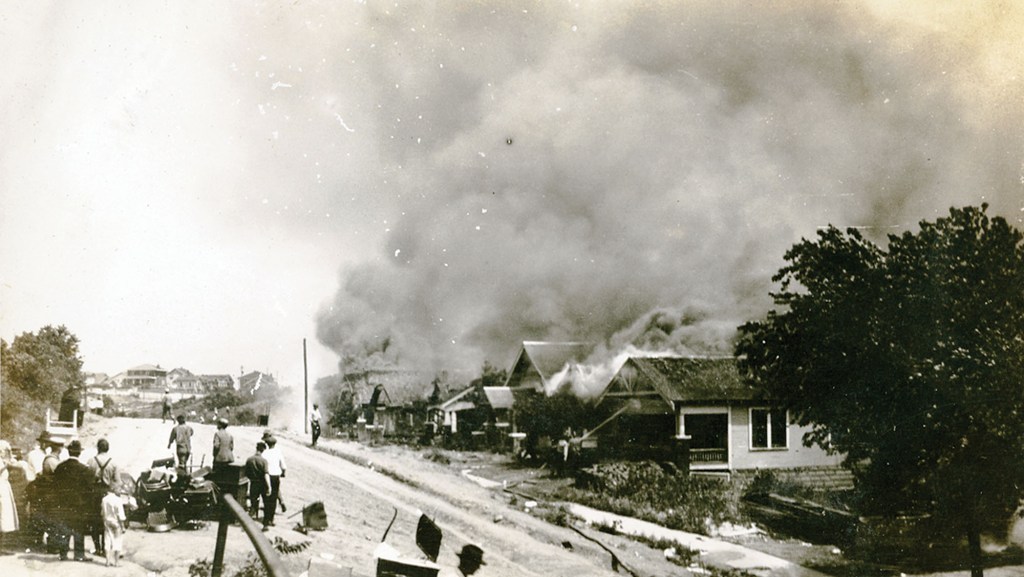 The first moments of HBO’s postmodern superhero miniseries Watchmen were simply terrifying: A panicked black couple and their young son roam the fiery streets of Tulsa, Oklahoma, in 1921, witnessing – and narrowly avoiding – a massacre as white supremacists destroy a prosperous neighborhood commonly referred to as “Black Wall Street.” “Since its premiere in October 2019, much has been written about how this five-minute sequence has done more to introduce audiences to this repressed moment in history than any school program ever could (not so many textbooks, if any, actually document the reality (Tulsa Race Life Massacre).

Sepia toned images and synthesized score cinematize the cruelty to amplify the emotional impact of that violence in the Emmy-nominated film. Tulsa Burning: The 1921 Race Massacre. Yet, watching the History Channel two-part documentary (now available on Hulu), my heart also pounded as I watched archival footage from the 1990s of elderly survivors of the massacre recounting their flash memories of this long-lasting trauma. “At 9, it was very disturbing because I was sleeping,” shares an elderly woman on a grainy videotape. “My mom woke me up and told me to get up. She said: ‘Eldoris, Eldoris! Get up so I can dress you. White people kill people of color. Eldoris McCondichie’s now decades-old statement, delivered with the poetic clarity and cadence characteristic of the greatest generation, underscores the value of actually listening and absorbing lived experiences.

An explosive action scene can do wonders in invigorating the past, as can the testimonies and oral histories of those who have truly lived through horror. These double non-fiction (Burning tulsa) and romanticized (Watchmen) Television performances work together not only to resurrect a neglected historical episode, but also to disseminate information to millions of people. The legacy of what happened in Tulsa has been silenced for almost a century thanks to hegemonic politics. Television – traditionally and disdainfully referred to as “the idiot box” and “the nipple tube” – has served to educate countless viewers about events that have been excluded from the history books.

At a time when many of our country’s leaders are trying to restrict the social studies curricula taught in American schools, including muzzling the narratives of oppressed and excluded peoples from Black, Indigenous, Latin, Asian and LGBTQ + communities, it still seems more vital that television and pop culture continue to embrace this kind of storytelling peeled back. As such, some of the best TV shows of 2020 and 2021 have offered visionary tales of forgotten (or misinterpreted) affairs from the past.

Beyond honoring Burning tulsa, which was nominated for its writing, music and sound editing, the Emmy Awards also went to other illuminating period programs such as Lovecraft Country, The Underground Railroad, Bridgerton, The crown and Pose. Unlike the whole of the 1960s The Queen’s GambitHowever, these series don’t just take place in the past to capture a distinctive cultural moment or lush period aesthetic. Instead, these shows come with a lesson: They hope to sweep away the dusty layers of presumption and misinformation to present different sides of the story that viewers thought they knew or never got the chance to know first. place.

THEOvercraft Country and Underground Railroad, for example, using fantasy tropes to unearth under-explored chronicles of racial abuse in the American HBO supernatural drama Lovecraft Country Initially follows a group of black road tripers crossing the United States in the 1950s. Confronted with lynching, Jim Crow laws, twilight towns and de facto segregation in the north, the series literalizes these horrors by strongly incorporating gore and the occult in history. Both Lovecraft Country and that of Amazon Underground Railroad present a sickening house of fun reflecting our nation’s relationship to eugenics, racist pseudoscience and the systematic medical abuse of blacks. In its best episode, Amazon’s magical realistic limited series hints at the sagas of racialized forced sterilization in real life when it brings once-slave runaways Cora and Caesar (Thuso Mbedu and Aaron Pierre) to a seemingly safe village that also happens to be missing from black babies and children.

Bridgerton and The crown, both from Netflix, initially appear to be narrative foils. The former is mostly vigorous and gusty, showcasing an unusually vibrant pre-industrial sort of Merry England where everyone rubs shoulders with some sort of romantic frippery. The latter is often sour and austere, describing life in mid-20th century Britain as a never-ending series of serious national crises. But both shed light on secret or overlooked chapters of the British monarchy.

By explicitly making Golda Rosheuvel, a black actress, the wife of George III, Queen Charlotte and writing her as a black royal who ushered in a new wave of racial fairness in this alternate version of England’s he period of the Regency, the series alludes to the reality of historians. life speculation that Charlotte of Mecklenburg-Strelitz had African ancestors through her Portuguese lineage. (A possibility that still seems relevant as Meghan Markle publicly navigates her role within the British Royal Family.) The crown, although more reserved in her social justice goals, reframe the sexism and ableism exerted on Princess Diana (who has struggled with mental health issues, including an eating disorder) during some of the most troubled times of his marriage. Showrunner Peter Morgan as a whole makes you wonder if the very existence of the monarchy is an inherent violation of human rights against those who must shoulder its responsibilities.

Unlike royal history or some aspect of black American history, LGBTQ + history is rarely taught in K-12 schools – for example, I was 20 when I heard about Harvey Milk or the Stonewall riots. This is why the FX Pose, which explores New York’s ballroom culture, early trans activism, and the AIDS epidemic of the 1980s and 1990s, is a powerful educational tool for viewers. Because trans rights have become a national issue in large part over the past 15 years, it’s easy for some cis and non-queer viewers to forget that trans and non-binary people existed long before our present times. The series mainly centers trans actors and characters in a setting where we don’t often see them: the past. Same reality competition RuPaul’s Drag Race incorporates queer cultural history into its storytelling.

But the story is not just something that can be added and taken away from the present as a Velcro accessory. It’s continuous, in real time. Emmy nominated documentary Welcome to Chechnya follows Chechen refugees using hidden cameras as they escape Russia during the purges and persecution of gay men that have been taking place in the region since the late 2010s. The film, which notably uses AI and advanced visual effects to protect the identity of its subjects, emphasizes that history is alive and breathes. As painful as it may be, sometimes we get to see it unfold on camera.

This story first appeared in an August issue of The Hollywood Reporter magazine. To receive the magazine, click here to subscribe.