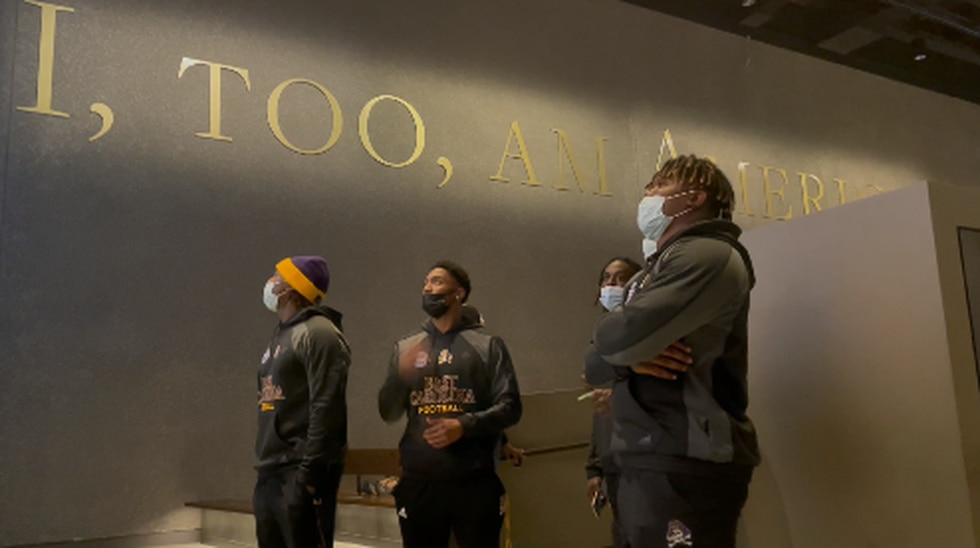 WASHINGTON, DC (WITN) – Part of Military Bowl week is exploring the area around which the game will be played. He really hit home with ECU football on Friday.

ECU football trained on Friday morning and it went rather well according to the team. The pirates boarded the bus and traveled to the National Museum of African American History and Culture in the afternoon in Washington DC

“A great experience. It was very powerful to see everything. Find out more about our African-American compatriots. For those who aren’t, to learn some of the things our people have been through, “says ECU Ford Safety DJ,” To see a part of the story that isn’t talked about as much as everything else in the world. story. Like it’s really cool when you start from the bottom and there is all the slavery stuff, then it progresses to civil rights, then it spreads more to sports and visual arts and culture. musical and things like that. He touches everything about African Americans and our history here in this country. It’s awesome.

“I’m just glad people came and got to experience it,” says ECU running back Rahjai Harris, “Because you know we see it on Twitter all the time, and we can search it on google, but just coming here can really change your life, change your outlook on life. What your grandparents, or a family you’ve never met before, had to go through is crazy. But you know it’s good that we can get the knowledge from museums like this.

Some of the players had been to the museum before, but for many it was the first time.

“I feel like they were a little caught off guard by the sheer details of all of the exhibits,” says Ford, The Verbiage That Was Used In Some Of The Slavery Stuff. “

These pirates say it says a lot for their football team to embrace this museum experience.

We do not have Saturday news on WITN. We’ll have something on Saturday’s team activities on social media and on our website tomorrow night.