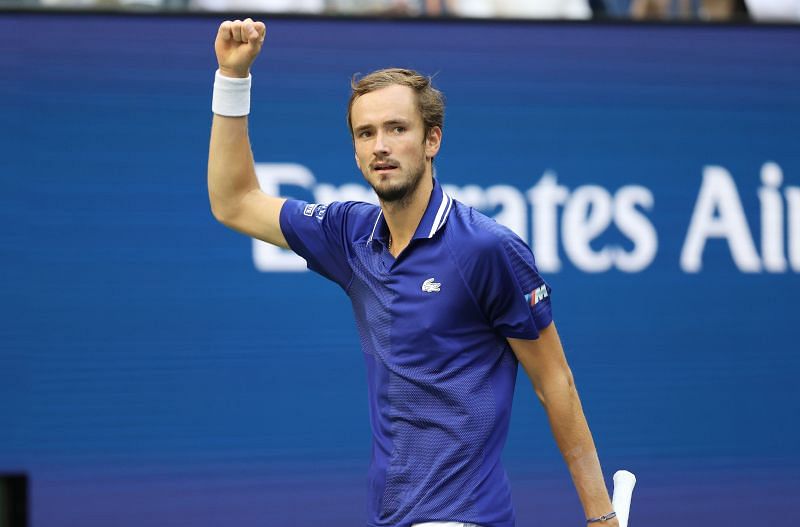 Daniil Medvedev qualified for his second major final of the year, beating Canada’s Felix Auger-Aliassime in straight sets on Friday. The Russian will now face world No.1 Novak Djokovic in the final on Sunday.

Djokovic aims to become the undisputed leader of the all-time Slam standings by winning his 21st title. A triumph in New York will also make him the first man since Rod Laver in 1969 to win the Calendar Slam.

Speaking to reporters after his semi-final victory, Daniil Medvedev admitted that he himself has a chance to make history by preventing Novak Djokovic from making history. At the same time, Medvedev claimed that the occasion would have more effect on the Serbian than on him.

“Yeah, I think on my side of course I’m probably, if I can do that, I’ll probably be kind of in the history books for not letting him do that,” Medvedev said. “But I don’t really care. I think it’s more about him, than it affects him.”

The Russian added that the meeting could be even trickier than usual, as the luck of history would make Novak Djokovic more determined on high pressure points.

“On the one hand, for sure he’s going to feel a bit of the pressure on this,” Medvedev said. “On the other side, that’s what will make him even better in tough times. I don’t know, say, maybe he’s going to lose two sets to one or zero and take a break. another slam, another time he wouldn’t – you know he always does his best too, but he wouldn’t throw up anything. Here we know he will do anything to try to make it happen. “

Daniil Medvedev entered the 2021 Australian Open final on a 20-game winning streak, having beaten all active members of the top 10. He was however outscored in the final by Novak Djokovic, losing in straight sets.

The 25-year-old said on Friday that he learned a lot from this game, especially in terms of tactics.

“Definitely tactically, because he was playing differently from games he played before me, and I wasn’t ready for that. So now I am,” he said. “I think, yes (…) it’s going to be more tactically interesting in terms of what I’m going to prepare.”

Daniil Medvedev added that he had not “left his heart on the pitch” in Melbourne, which he will make sure to do on Sunday.

“I think what I understand is that I’m always doing my best, but I feel like I haven’t left my heart on the Melbourne court,” said the Russian. “Even though of course I wanted to, there was something that didn’t happen in this game. That’s what I’m going to try to do on Arthur Ashe with hopefully 100% of the fans. Few. whatever the score, I’m just going to turn the heat up, if I may say so, and try to do my best, even more than I did in Melbourne. “

“The more you lose, the more you want it” – Daniil Medvedev as he approaches his third Grand Slam final

During the press conference, Daniil Medvedev also spoke about how hungry he was to win the 2021 US Open after losing his two previous Slam finals – at the 2019 US Open and the Australian Open. 2021.

The Russian claimed his run and expectations were very different from what they were two years ago at Flushing Meadows.

“Yes, for me experience is key,” Medvedev said. “First, again, crazy story, crazy tournament, playing against Rafa. I want to win everything I play, but I was a bit underdog. Let’s be honest, I was already happy to be in the final. It was first brilliant I just won a Masters, which was already huge. I was in the final. So everything was positive, which helped me to play well. I didn’t have it. feel like it was a must to win.