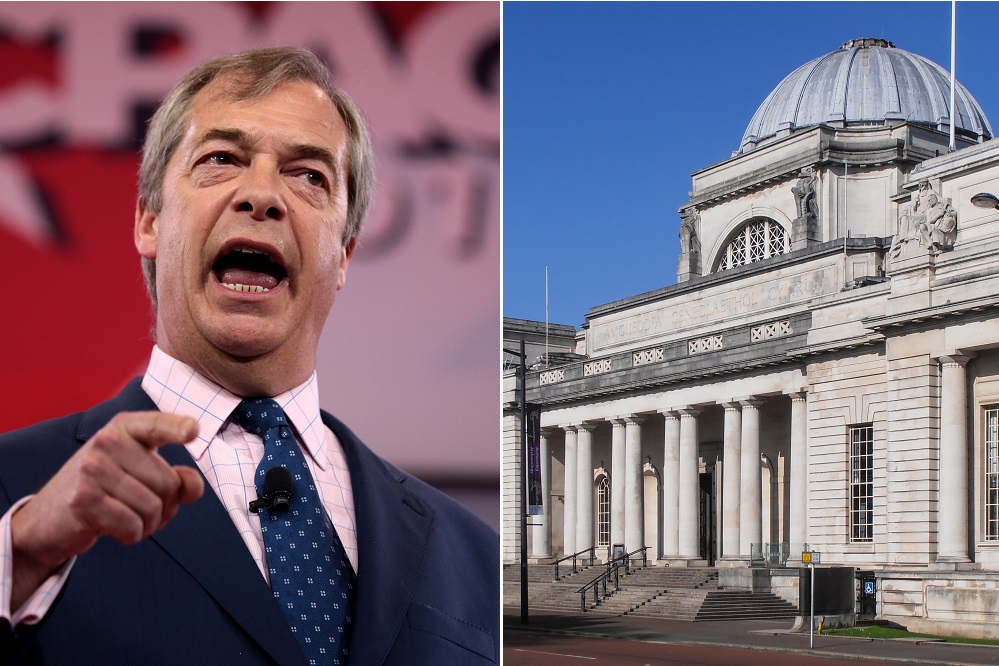 The director of the National Museum of Wales said he was “honored” to display placards from 2020s Black Lives Matter rallies after Nigel Farage used his GB News show to attack the exhibit.

David Anderson, chief executive of the National Museum Wales, said it was more important than ever to “stand up for democracy and cultural rights” and that they “need to collect many more stories from black communities in Wales, Not less”.

Nigel Farage had attacked the museum in a segment titled ‘WFT – Woke Wales’ on his GB News show, in which he said the display was ‘highly inappropriate’ as Black Lives Matter was ‘violent’ and ‘Marxist’.

But he was heavily criticized for his comments by the museum, Welsh politicians and others who backed their decision to display the signs.

📣 Black lives matter ⁣📣
⁣
The signs used in #Black Lives Matter protests across Wales are now on display in the Wales Is gallery in St Fagans.

The National Museum of Wales said: ‘We stand by our decision to display these BLM signs. At Amgueddfa Cymru we strive to represent the diverse experiences of people living in Wales today through the National Collection.

“Communities in Wales continue to take an active role in the Black Lives Matter movement.”

David Anderson, the chief executive, said: “BLM activists, not museums, are the makers of history. We are honored that they have given us their signs to display in St Fagans.

“Now, if ever, it is time to stand up for democracy and cultural rights; we need to collect many more stories from black communities in Wales, not less.

Professor Uzo Iwobi, the founder of Race Council Cymru, replied: “Nothing surprises me when it comes to this individual, he constantly conveys contempt for marginalized people.

“Bravo National Museum of Wales for bringing to light this historic moment in our lives.”

Nigel Farge had criticized the museum in a ‘WFT – Woke Wales’ branded segment by the GB News chyron.

“The ‘what the Farage’ moment is that the National Museum of Wales decided it was appropriate to display banners that took part in last year’s Black Lives Matter protests,” he said. he declares.

“Here it is – Black Power for the People, Black Lives Matter. And, you know, we know in the aftermath of the horrific death of George Floyd, we know this stuff has swept the country.

“But now we know what the Black Lives Matter organization is all about. They want to defund the police. It’s Marxist, it was extremely violent in America.

“I would have thought given all those things. It was a very inappropriate thing for the National Museum of Wales to have done.

The display at St Fagans Museum includes photographs and stories from activists who took part, as well as a bullhorn used at one of the protests and an information display to better inform the public.

Sioned Hughes, Head of Public History and Archeology at Amgueddfa Cymru, said: “Collecting contemporary documents is at the heart of Amgueddfa Cymru’s work, to ensure that the national collection represents the diverse experiences of people. living in Wales now and in the past.

“It is important that we display these signs in Wales is…a gallery to tell the story of the Black Lives Matter movement in Wales and its impact on communities.”

The National Museum is a family of seven museums and a collection centre, with free admission thanks to support from the Welsh Government. Together, it houses the country’s art, history and science collections, which will continue to grow so that they can be used and enjoyed by present and future generations.

The program of events and exhibitions is supported by players of the popular postcode lottery.