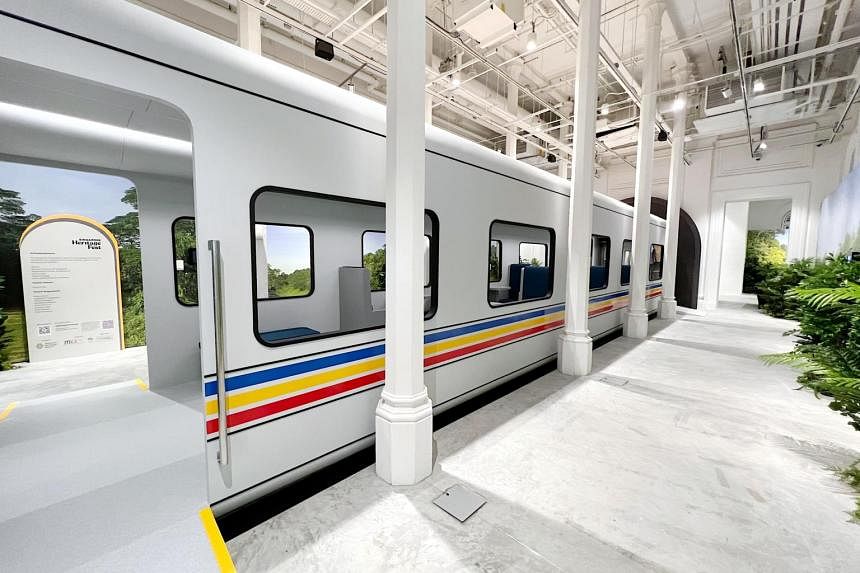 SINGAPORE – About 11 years after its last crossing from Tanjong Pagar Island to Woodlands en route to Malaysia, the Keretapi Tanah Melayu (KTM) train is back – this time as a plywood model in the National Museum of Singapore.

The recreated train cabin, which gives visitors a sense of what it was like to travel on trains more than a decade ago, marks the return of Singapore HeritageFest this year with the themes of travel and nature.

The National Museum serves as a welcoming ground, where visitors can learn about its more than 120 programs.

This year’s festival, to be held May 2-29, has considerably more in-person offerings than the mostly virtual editions that took place after the Covid-19 pandemic in early 2020. About two-thirds of this year’s events are taking place on site. , with the rest online. Less than half of last year’s programs were in-person.

Festival director David Chew, 41, said Wednesday (April 20) that KTM trains and the route they once ran, the Rail Corridor, collectively bring the two themes together.

“Before the advent of cheap flights, taking a train to Malaysia was the idea of ​​a family holiday for many Singaporeans,” said Mr Chew, who added that the 24 km long rail corridor, put in place after the closure of the railway line, has served nature lovers well over the past decade.

Mr Chew said the travel theme pays tribute to Singaporeans working in the sector, which has been hit hard during the Covid-19 pandemic.

“(We want) to recognize their efforts – not just the resilience over the last two years – but also the last 50 years or so, representing Singapore to the rest of the world,” he added.

Among the programs that celebrate Singapore’s travel and tourism heritage is a visit to the National Monument Fullerton Hotel, which previously served as the General Post Office. Apart from showcasing the hotel’s architectural features, it also serves as a reminder of its role in Singapore’s colonial, war and independence years.

Also among the travel-related offerings is a visit to the Singapore Aviation Academy, where the country’s air traffic controllers are trained. Through a training simulator, participants will be able to experience day and night settings in a control tower from the perspective of a traffic controller.

Those who prefer to enjoy the festival from home can explore a series of videos showcasing the treasures of private collectors such as Mr. Jason Ang, a self-proclaimed Singapore Airlines enthusiast.

The 52-year-old attendant said: “By showing my collection, I hope people can witness a slice of history – how SIA grew from a small operator to the big-name airline it is. today.

“When people overseas think of Singapore, they first think of Merlion and SIA. I hope this will make people feel a sense of pride, like me.”

On the other theme of the festival, natural heritage, Mr Chew noted that Singaporeans were flocking to natural sites during the pandemic.

As borders reopen and people start planning overseas holidays, he said the festival provides an opportunity for Singaporeans to continue to rediscover the island’s natural surroundings.