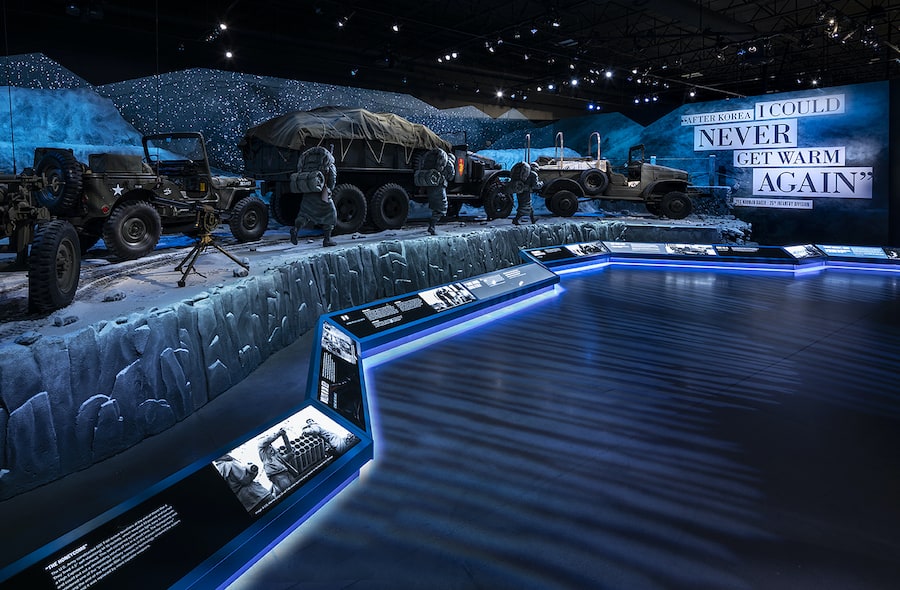 Roto, a leader studies and design-build office, worked with the new $ 100 million National Museum of Military Vehicles (NMMV) to create a new, immersive experience for visitors.

The museum houses the world’s largest private collection of military vehicles and tells the stories of the people who fought there. Inside its new 40,000 square foot Puller Gallery, Roto has reinvented the traditional military museum by immersing visitors in the stories of Vietnam’s military and the Korean War through dynamic and interactive experiences.

NMMV officially opened on Memorial Day 2021 and is located in Dubois, Wyoming. The 140,000 square foot museum, founded by Dan Starks, the former CEO of St. Jude Medical, has 475 fully restored military vehicles, artillery, warships and airplanes. Through these, he explores the American experience during WWI, WWII, the Korean War, and the Vietnam War.

For this project, the creative design agency set out to create exhibits that show visitors what it would have been like to serve with these vehicles, communicating not only their technical prowess but also the authentic personal stories of those who fought with them. them.

“Roto’s goal was to help the museum fulfill its mission of honoring the service and sacrifice of veterans and their families,” explains Allen Boerger, founding partner and COO of Roto. “To bring this to life, we focus on personal stories, real objects and recreate authentic environments.

“The combination of these elements creates a new perspective and a real sense of immediacy. It’s history, but it’s also here, now.

The Puller Gallery takes its name from General Lewis “Chesty” Extractor, the most decorated Marine in United States history. It houses a variety of immersive sets, media installations, thematic lighting, map projections, as well as realistic and interactive characters.

Upon entering, visitors are transported to a series of immersive historical scenes, such as a nocturnal jungle surrounded by bamboo shoots and a moonlit projection-mapped environment full of hidden traps and enemy forces. They will also encounter an American firebase where a faithfully restored M109 155mm howitzer sits on the edge of enemy territory, with an animated fresco showing distant battles and helicopter operations.

Meanwhile, the Battle of Chosin Reservoir is depicted as a frozen mountain towering above visitors, featuring a series of cast figures that reflect the emotion of that defeat.

The Roto team approached each historical section of the Puller Gallery as an experiential ‘stage’, says Boerger:

“Our goal was to provide every visitor with an invitation to step into a historical story, whether it was walking through a dangerous nocturnal jungle landscape or joining the arduous, windswept winter walk of a convoy approaching the enemy. We want everyone to have a firsthand look at what veterans have done. And getting it right for veterans is so vital to ensure their stories are told and displayed accurately.

“It means being laser focused on every prop, every artifact, every detail, whatever it takes.”

In order to create an authentic experience, the company also interviewed veterans and perused hundreds of handwritten testimonials. Over 300 props are used, most of which came from veterans, collectors and surplus stores. These include “spike protection” jungle boots, Psy-Ops air-dropped flyers, and a 1960s Zenith TV console.

Additionally, Roto replicated some items that could not be purchased directly. For example, a rare Chinese Communist grenade, an American military travel rocket, an aerial motion detector, barrels of Agent Orange, and over 100 cases of ammunition.

“It’s not meant to be a passive experience,” says Boerger. “It’s both exploratory and cinematic. As visitors enter a new environment, we have created a “settlement map” that conveys the ambiance and the overall story we tell.

“From there, people discover these powerful stories at their own pace, zooming in on historical artifacts, these lovingly restored floats, and the details of the personal stories we tell through the museum. Everything is based on their own interest and curiosity.

Earlier this year, Roto collaborated with exhibition designer Studio Matthews and multimedia designer Belle & Wissell on the redesign of the Museum of Science and Industry, the Take Flight exhibition inherited from Chicago. Roto has completed fabrication and installation on the project.