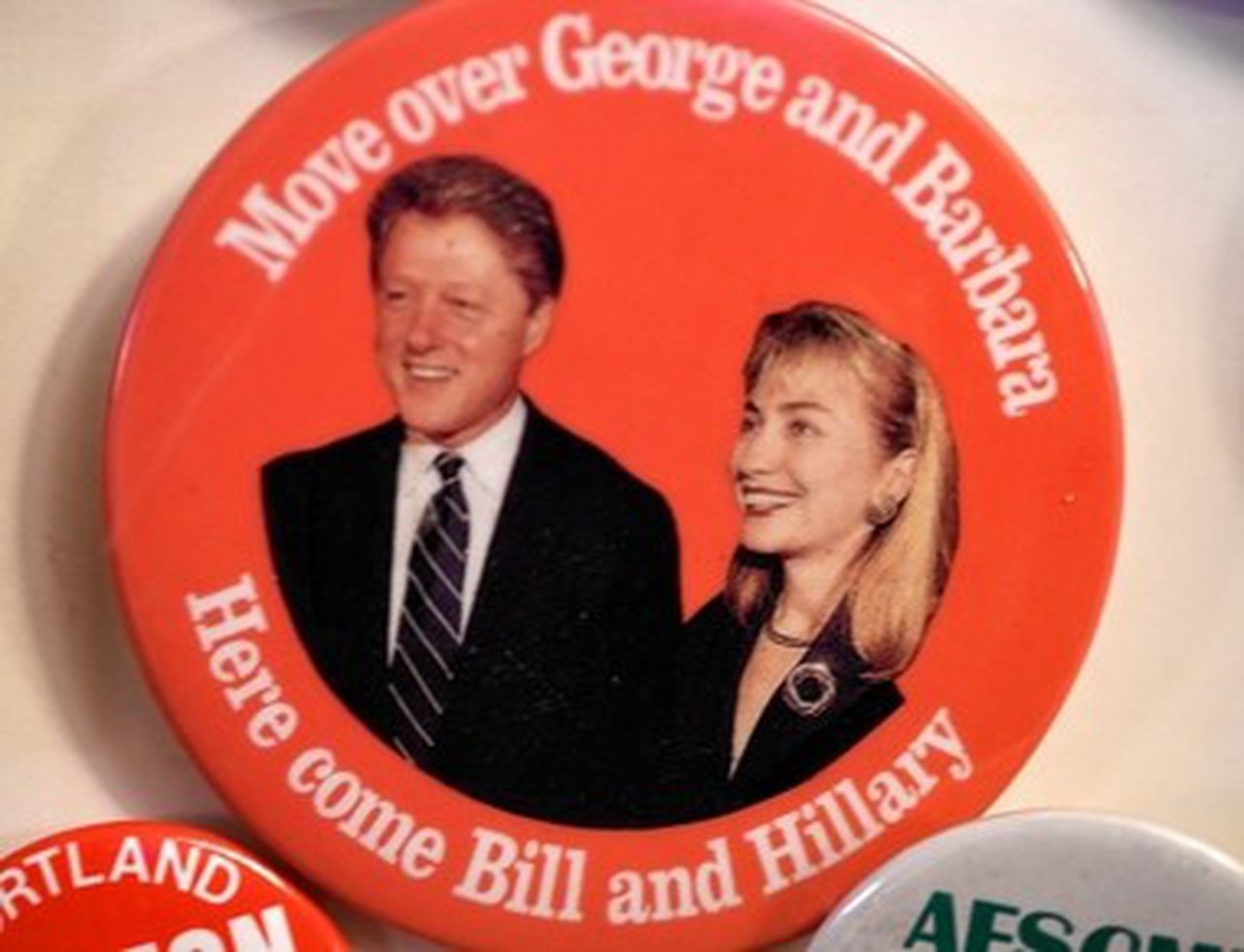 From there his fascination grew and his collection expanded to over 2,000 pieces, from a campaign piece by Andrew Jackson in 1824 to buttons by Bernie Sanders, Donald Trump, Hillary Clinton and other candidates. in this year’s elections.

He has memorabilia from many prominent political families, including buttons from the presidential campaigns of John, Robert and Ted Kennedy, George HW, George W. and Jeb Bush and Theodore and Franklin D. Roosevelt of New York.

Pieces from lesser-known political families include buttons from Mitt Romney’s 2008 and 2012 presidential campaigns, as well as his father George Romney’s short 1968 campaign.

An 1892 campaign poster for Grover Cleveland shows the only US president to serve non-consecutive terms alongside his running mate, Adlai Stevenson I. In 1952 and 1956, Stevenson’s grandson, Adlai Stevenson II, lost the presidential election against Dwight Eisenhower.

Several buttons from Bill Clinton’s 1992 campaign show a young Hillary Clinton, including one that says “Move over George and Barbara (Bush), Here come Bill and Hillary”. Another says “I support Hillary Clinton’s husband.”

Woodworth said Harry Truman memorabilia are the hardest to come by as Truman didn’t campaign much and produced relatively little campaign material.

Only about 70 copies of the diary remain, Woodworth said.

Other rare pieces in Woodworth’s collection include the campaign buttons of Shirley Chisholm, the first black woman elected to the House of Representatives. In 1972, she became the first African American to run for the presidential nomination of a major party.

It has a button from 1992, calling on voters to write the name of former New York Gov. Mario Cuomo for the presidency. Despite a wave of rumors and speculation, Cuomo was never a presidential candidate. It’s the only Woodworth campaign button promoting a candidate who has never declared their candidacy.

Woodworth has an orange and blue “I’m for Jack” campaign button that John F. Kennedy gave to Syracuse in 1960. This button is special, said Woodworth, because it was the only memento of Kennedy’s campaign that did not exist. was not red. , white and blue.

Woodworth, an original member of Jimmy Carter’s “Peanut Brigade,” sent a postcard to the former governor of Georgia as soon as Carter announced his candidacy for president in January 1975.

A few months later, Carter called Woodworth to let him know he was coming to Syracuse and asked if he would meet him at the airport. Woodworth said he accompanied Carter to Syracuse for the day.

A year later, Carter called back and let Woodworth know he was coming back to town. This time, the future president had a detail of the secret services with him.

Woodworth then attended Carter’s inaugural ball, among such figures as Aretha Franklin and Muhammad Ali. He still receives a Christmas card from Carter every year.

Currently, Woodworth presents his collection to residents of nursing homes and assisted living centers in the Syracuse area. He also presented at Onondaga Community College on March 1 to commemorate Super Tuesday.

He said part of his collection comes from various button shows, but much of it comes from word of mouth or the advertisements he buys in local newspapers.

This feature is part of CNY Nostalgia, a section on syracuse.com. Send your ideas and curiosities to Jacob Pucci: Email | Twitter | 315-766-6747