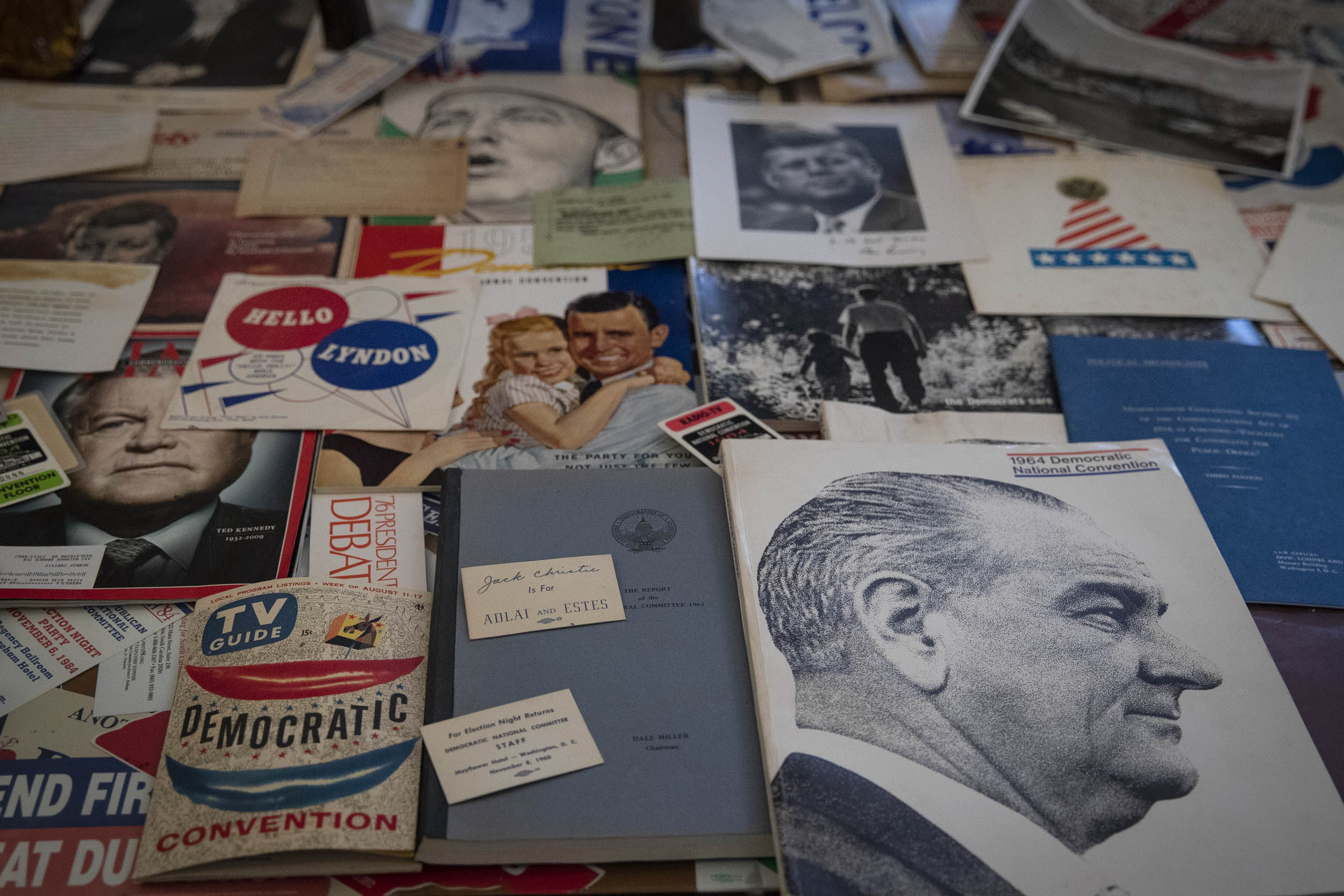 The more than 400 articles, covering both political parties and seven presidential administrations, reflect one man’s long-standing passion for American politics.

Jack F. Christie was a World War II veteran, a former NBC host and administrator of the Democratic National Committee responsible for the logistics of the party’s huge national conventions. He was particularly close to President John F. Kennedy, having worked both on the young senator’s presidential campaign and as a liaison between the Kennedy White House and the Democratic National Committee.

Upon Christie’s death in 2008, his vast collection of presidential memorabilia – including campaign and inauguration paraphernalia from both sides, original audio and video recordings, and his personal correspondence with politicians across the country – was in need of a new home.

His nephew, Robert Christie, chose the Center for Politics at the University of Virginia.

This is the largest private collection ever donated to the center and includes material from the Franklin D. Roosevelt, Truman, Eisenhower, Kennedy, Johnson, Nixon and Carter administrations.

“It is particularly remarkable to have a collection spanning so many jurisdictions,” said Center for Politics chief of staff Ken Stroupe.

While faculty, staff, and students are still reviewing all items, they have already found some gems, including a photo of young Christie interviewing First Lady Eleanor Roosevelt on NBC, an elephant-shaped glass bottle engraved with the face of presidential candidate Richard Nixon. , and – one of Christie’s most treasured articles – the Podium Bible used when Senator John F. Kennedy accepted the Democratic Party’s nomination for president at the 1960 Democratic National Convention.

After Kennedy’s successful campaign, Christie worked closely with the Kennedy White House in her role on the Democratic National Committee. He also had a years-long correspondence with crooner Frank Sinatra, a close friend of Kennedy’s whom Christie met at the 1960 convention.

“My uncle would always tell us background stories, little things that were going on behind the scenes with Kennedy,” he said. “They were both veterans, both young, and they just had a lot of respect for each other.”

In one story, Kennedy – plagued with back problems for most of his life – was in tremendous pain right before he gave a televised speech. The president could barely stand, but he didn’t want to lean on the podium; he knew it would make him look weak. As staff scrambled to find a solution, Christie suggested cutting off the legs of the podium, making it just big enough for Kennedy to lean on without looking like it.

He said Kennedy turned to him and joked, ‘Let some guy in the military fix the problem,’ Christie said.

Another favorite moment came during the election campaign, after Kennedy won the Democratic nomination. Someone in the party told the young candidate that he fingered too much when giving speeches. Kennedy asked Christie if he was okay with it.

While Christie certainly had many memories of Kennedy, her collection dates back to several years before Kennedy’s ascension, to Christie’s college years and to the start of her radio career with the NBC program, “Youth Wants to Know. “. The program aimed to introduce young people to key political figures of the time. Christie, who attended Syracuse University after serving in the Army Air Corps, joined her staff shortly after graduation.

“He started out there, getting politicians on the show,” Christie said.

Among the photographs in the collection is that of a young Christie with Eleanor Roosevelt, taken when the first lady appeared in “Youth Wants to Know”.

The collection isn’t limited to the Democratic side of the aisle. Although Christie was a Democrat for much of his political career, his nephew said he aligned himself more with the Republican Party under the Ronald Reagan, George HW Bush and George W. Bush administrations. Then, towards the end of his life, he found much to admire in another young upstart Democrat: Barack Obama.

“He was very impressed with Obama,” Christie said, although his uncle passed away in February 2008, nine months before Obama won the presidency.

Among the artifacts in the collection are some of the more unusual items offered to supporters of the Presidency, such as this commemorative bottle issued by Richard Nixon’s campaign. The supporters received it as a keepsake they could use during the campaign and keep in their homes for years to come.

“The idea was for these items to be durable, not just disposable,” Stroupe said, stressing that campaign finances do not allow such items as many now. “It takes you back to another time, when you see how elaborate these articles are.”

Stroupe hopes the collection will remind students of the popular nature of American politics.

“The collection reflects how important building an image is at a local level,” he said. “It’s an example of popular politics and how politicians have worked to build an image and a name for themselves. “

As the center lists the collection, it will be used in classrooms and for public events and will also be available for research. Upcoming events for the Center include the 20e annual American conference on democracy, to be held in Charlottesville this year.

“The Center for Politics is delighted to receive this impressive collection of presidential artifacts, and we are grateful to the Christie family for their support of our ongoing work in this area,” Center director Larry J. Sabato said in a statement. Press release. “These items, many of which are not only rare, but rarely seen, will be used – with care – in our classes and featured in the centre’s next program of events in the fall and spring semesters.”

As for young Christie, he is happy that so many students have the opportunity to see and learn of the objects his uncle cherished. After all, his uncle’s last request was for the collection to be shared with those who would use and appreciate it.

“I felt great to donate the collection to UVA, because I felt it would meet what my uncle asked for,” Christie said.