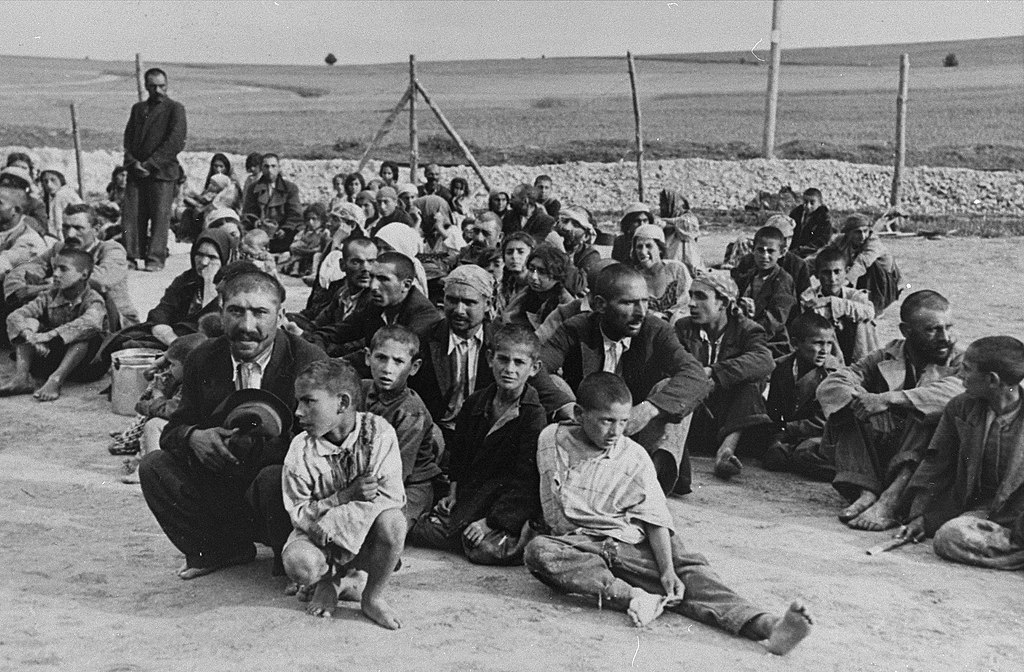 TODAY is Roma Holocaust Remembrance Day – but ask most longtime anti-racists what August 2 means and they’ll be stumped.

Because our history, like our fate, remains one of Europe’s dirty secrets.

So come with me, if you will, on a journey into the past of the 12 million Roma in Europe, because we desperately need your help to ensure a better future. Because history does not always repeat itself exactly, but in 2021 it begins to rhyme.

On that day, in 1944, 4,300 Roma were murdered in the Auschwitz-Birkenau concentration camp.

They were taken overnight from their barracks to the gas chamber by SS guards.

The massacre was a retaliation against the community which led a desperate uprising at the death camp.

A few months earlier, on May 16, Roma prisoners in the so-called Zigueunrlager (gypsy camp), having heard of the impending liquidation of the camp, opposed the Nazi guards armed only with hammers, pickaxes and shovels.

Due to their challenge, no Roma died in the gas chambers that day. The Roma revolt against the Nazis is the only uprising recorded in Auschwitz and is now commemorated as the Day of Roma Resistance.

We still don’t know how many of us died in the Holocaust. Unlike the Jewish community, many of our ancestors could not read or write, so few independent records have been preserved.

Estimates range from 500,000 to 1.5 million people, their lives and stories are often lost in German statistics of those “left to liquidate”.

We were the only other racial minority alongside the Jewish community specifically subjected to the Nazi “final solution” – and a similar percentage of the Roma and Jewish community were wiped out.

But there the parallels end, because what the following decades have taught us is that some inequalities are unfortunately much more equal than others.

So today we will mourn for those we have lost, but tomorrow we have to pick up the shovels again.

Across Europe, a mudslide of racist violence is once again engulfing our people. From Hungary to Britain, right-wing governments are once again the scapegoats for our people – and the results can be deadly.

In the Czech Republic, Roma man Stanislav Tomas died in Teplice on June 19, 2021, after a Czech policeman knelt on his neck for six minutes.

In footage comparable to George Floyd’s murder in the United States, the video has gone viral, prompting Roma across Europe to protest police violence.

The Czech authorities deny any wrongdoing and the police have been congratulated by the Minister of the Interior for their good work.

After the Council of Europe called for an independent investigation, the Czech president said he had no reason to doubt the results of the internal investigation, which concluded that the behavior of the police was correct.

In New York, Berlin, Brussels, Glasgow, London, Vienna and countless cities in Eastern Europe where the Roma population is large and growing, the Roma are demanding justice for Stanislav and for themselves.

For many of us, the end of the Holocaust did not mark a turning point in our treatment and our chances of life. Those who had survived the Nazis were quickly forcibly settled and assimilated into urban misery by the Stalinist regimes.

Over the past decades, the forced sterilization of Roma women, poverty and overrepresentation in public establishments and special schools for Roma children, and deep-rooted prejudices have driven us forward.

Such racism has led to a huge wave of migration of Roma to Western Europe. This has led to a doubling of the UK population of Gypsies, Roma and Travelers to at least 600,000 people.

But Britain is no safe haven. The hostile environment experienced by Britain’s Gypsy, Roma and traveler community for over 500 years has recently intensified.

Priti Patel’s Police, Crime, Sentencing and Courts Bill not only restricts the right to protest, but also seeks to ban nomadic Gypsy and traveler culture altogether.

On July 7, more than 1,000 community members gathered in the shadow of statues of Mahatma Gandhi, Nelson Mandela and suffragist Millicent Fawcett in Parliament Square to launch the Drive 2 Survive campaign which will run from Westminster at the Appleby Fair (the world’s largest gypsy horse fair) in August in Cumbria, at the Conservative Party conference in Manchester in October 2021.

Just as Gandhi, Mandela and Fawcett have used direct action to fight for equality, members of the Gypsy and Traveler community will resist the ban on our cultures. Our communities have come together to fight the bill, but we desperately need your help to stop it.

“As a nomadic people who have roamed the lands we have lived on for all of our recorded history, being told suddenly that our way of life has no place in society is totally wrong and hurtful,” Chris said. McDonagh, Irish activist.

“We all live in a country that is supposedly proud of its acceptance and equality for all ethnicities and minorities, but now we see that is a lie. We are people and we deserve to live our life as we always have. We deserve to exist.

The first objective of the Drive 2 Survive campaign is the removal of Part IV of the bill which creates a criminal trespassing law and greatly increases the powers of the police over anyone residing on land on which they do not. not allowed to be found.

We believe that the draconian powers of the Criminal Justice and Public Order Act 1994 which already lock gypsies and nomadic travelers into a cycle of trespass and eviction and do not need to be strengthened but repealed.

Patel cannot ignore the fact that the powers of the police are already too excessive. It is not only Gypsies, Roma and Travelers who are resisting these new powers, but representatives of the National Council of Chiefs of Police.

As evidence at the committee stage of the police bill, the community and the police were united in calling for a better way to resolve the conflict over the lack of staging areas.

The community takes the threat of the new legislation so seriously that they have organized the first Romani Kris (council of elders) in decades to debate and decide on a unified response to Patel’s bill in Appleby.

Billy Welch, organizer of the Appleby Hereditary Fair, sees a direct parallel with the state violence to which Roma populations were subjected before the Holocaust, because before the death camps came the ban on life nomadic across the Third Reich.

“The people I represent are anxious about these proposals and with good reason. They recall Nazi Germany in the 1930s and the start of the ethnic cleansing process in which Gypsies were forced off the road with fines and jail terms.

“Their horses and vehicles were confiscated, which ultimately led to them being sent to death camps or murdered by the side of the road.

“There are still many living Gypsies who lost their families in this Holocaust and they haven’t forgotten – that’s how it all began.

“Everything that was done back then was legal in the eyes of the Nazis, but history clearly teaches us that just because something is legal does not mean that things are okay. ”

To show your solidarity with the Drive 2 Survive campaign, come to Appleby Horse Fair in Cumbria between August 12 and 15
attend the National Drive 2 Survive Rally at the time of the Curatorial Conference at Piccadilly Gardens, Manchester at 1 p.m. on Saturday 2 October 2021.

Jake Bowers is a Roma journalist. For more information see www.drive2survive.org.uk and www.proudroma.org.